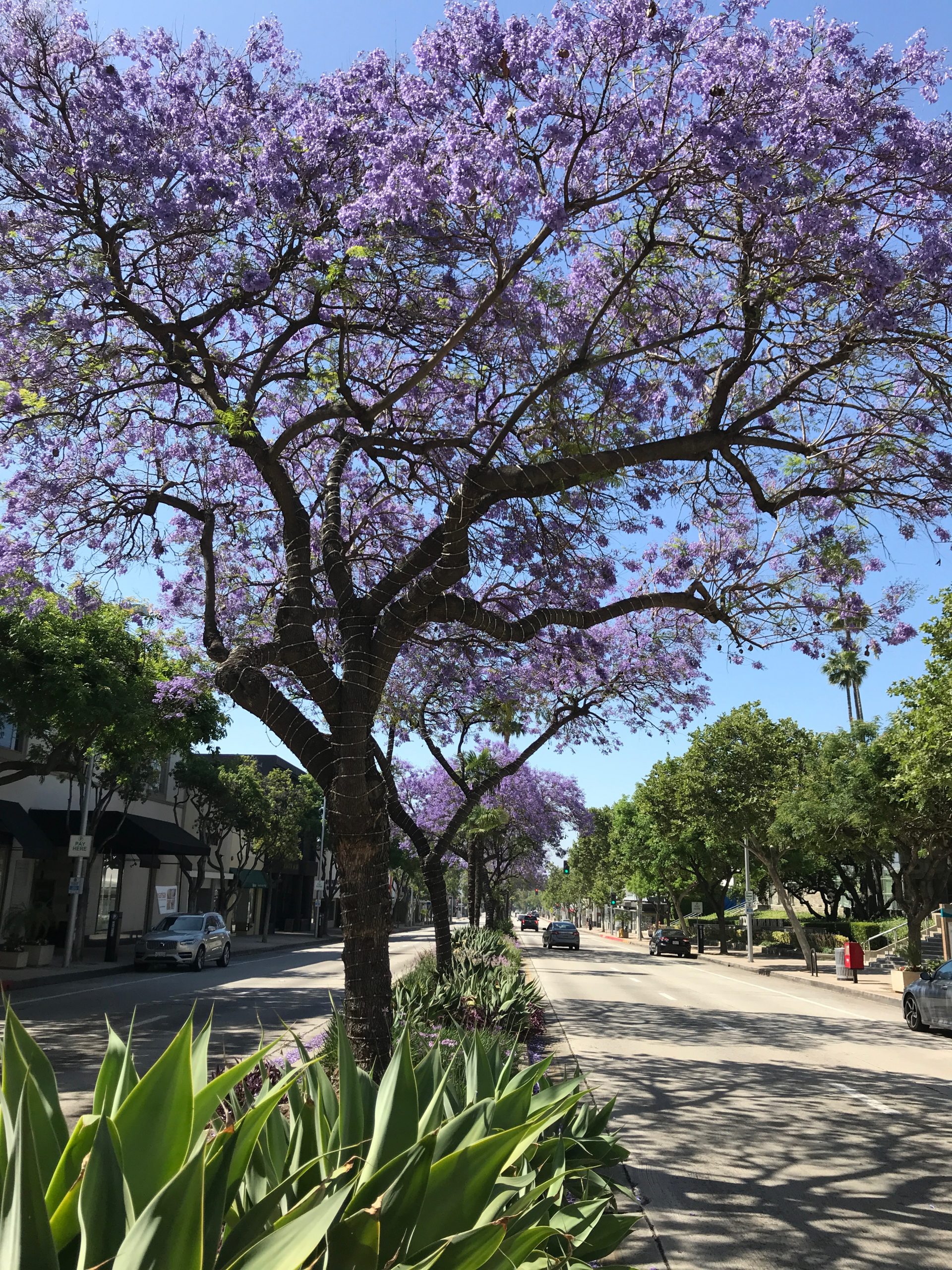 Tree of the Month Archive

June Tree of the Month

Quercus agrifolia also commonly known as the coast live oak which belongs to the Fagaceae (Beech) family is native to the California coastal mountains and valleys and can be found in areas from Mendocino County to northern Baja California.

This oak species is widely planted and in Pasadena it makes up for 10.08 % of the city’s tree inventory.  This is a big evergreen tree which can reach a height of up to 70 feet tall.  It has a large spread with gnarled branches and limbs with a rounded dense canopy.  The trunk is short and therefore, does not make for a good timber tree. The tree is considered very drought tolerant and can withstand both the heat and coastal conditions.  Like all other mature native California oaks, the coast live oak does not need to be watered during the summer months. Too much water can cause root fungus (Armillaria) which kills the tree.  If planted in an irrigated area, make sure to direct the water spray away from the tree trunk.

When young, the trunk and bark of the tree are smooth and light gray becoming dark brown and thick with deep furrows as the tree matures. The leaves are oval and curved under.  It is spiny along the edges like the holly leaves, glossy dark green on the upper side and veins with tufts of hair on the underside. The acorns of the coast live oaks are narrow and pointed with a dark chestnut brown color and deep puffy caps. In the early days, these acorns provided a good source of food for Native Americans.

The coast live oak is a very attractive specimen tree and does well in urban setting when planted in a parkway that is at least 10 feet wide giving it ample space to grow.  The tree does not tolerate severe root pruning and can cause moderate to severe sidewalk damage.  Among some of the pests and diseases to watch out for are Armillaria (root fungus), oak twig girdler, sudden oak death, the California oak worm and the Polyphagus Shot hole borer.

Here is an important fact about the oak that many of you may not know:
In 2001 the National Arbor Day Foundation conducted a poll over a 4-month period asking people all over the US which was their favorite tree.   At the end when the votes were tallied, the winner with 101,000 votes was the Oak (no particular species).   Coming in second place was the California Redwood with 81,000 votes.  Fast forward to 2004, Congress passed a historic bill which was signed on December 15th by then President George W. Bush making the oak America’s National Tree.

May Tree of the Month

The camphor is a gorgeous evergreen large shade tree, grows moderately fast, its canopy is rounded, very dense with arching strong branches. The tree can grow up to 50 feet tall and more and twice that wide which results in overcanopying in several streets throughout Pasadena.

One such street where you get to drive through a tunnel-like-effect of greenery is Prospect Boulevard from Orange Grove to Prospect Terrace in Pasadena where the first camphor trees were planted in 1904 and several of them still grace the neighborhood. An interesting example is the black and white photo below taken in 1904, courtesy of the Pasadena Museum of History and a recent color photo of the same location showing the overcanopying.

The camphor tree requires a large space to grow, does better in an 8- to 10-foot parkway, tolerates the summer heat and most soil conditions from acid to alkaline, it makes a great street tree, and does well in parks and large medians. The camphor tree is very prevalent in southern California and other southern states, it is however considered invasive in Florida. In Pasadena it makes up 9.17% of the city’s tree inventory list.

The trunk has furrowed light gray bark and becomes enlarged at the base with age. This unfortunately can cause the sidewalks to lift. The leaves are elliptical to ovate and emit a pleasant aroma of camphor when crushed. Even though the tree is considered evergreen some of the older leaves tend to drop in the late winter and early spring and are replaced with new pink to copper colored leaves that turn bright green and glossy as they mature.

In the spring the tree is covered with tiny little white to creamy, green-colored flowers that are fragrant, followed by clusters of globular black berries which contains a seed inside that birds love to eat.

Some of the diseases to worry about are Verticillium wilt, root diseases and anthracnose. The tree is valuable commercially for the camphor that is distilled from its leaves and wood.

April Tree of the Month

Pasadena is very fortunate to have several Pink Cloud flowering cherry trees with dark pink flowers growing in Victory Park, Memorial Park and Central Park. These trees can also add a beautiful accent to any garden.

Some background information on how the cherry trees came to be planted in Pasadena.  In 1957 Pasadena became a sister city to Mishima in Japan, a town located about 75 miles southwest of Tokyo.  Thanks to the Sister City Committee, friendships were formed, and cultural exchanges took place between Pasadena and Mishima.

In 2012, the Consul General of Japan in Los Angeles contacted Pasadena to let them know that an unlimited number of free bareroot Pink Cloud cherry trees were being made available to select cities in Southern California that had relationships with cities in Japan. The City Council then instructed the sister city committee to obtain 50 trees. These trees were procured and donated by the Huntington Botanical Garden to Pasadena.

This Pink Cloud variety grows 15 to 20 feet tall and as wide with a willowy round shape. The leaves are simple, alternate and toothed. The flowers have 5 petals and appear before the leaves in late March and early April.  Flowering cherry trees require full sun, good air circulation and a well-drained soil rich in organic matter. They also require some pruning during the winter.

There are many other cultivars of flowering cherry trees with blossoms ranging in color from white to dark pink. These trees produce some of the most dramatic blooms during the spring. The bloom season unfortunately lasts only a few weeks. Most cultivars live 30 to 40 years with a few exceptions such as the ones in Washington D.C. where some of the original trees that were planted in 1912 are still alive.

The sight of cherry blossoms is so spectacular people travel from all over to attend the Cherry Blossom Festival in our Nation’s capital. If you can’t make it to Washington D.C. or Japan where the tradition of celebrating the cherry blooms goes back thousands of years, you can still be dazzled by the beauty of the ones growing here in Pasadena.

March Tree of the Month

We are very fortunate to have several specimens of this tree growing throughout Pasadena. Several years ago, Pasadena Beautiful planted about 230 Tabebeuias on Colorado Boulevard from Wilson Street to Roosevelt Avenue.

This is a small to medium sized tree, 25 to 50 feet tall and almost as wide, with a light straight gray trunk, native to the tropical areas of Mexico, Argentina and Brazil. The tree is partially deciduous. Heavy clusters of showy pink flowers with a yellow throat appear on leafless branches in early spring, the spectacular display of flowers is followed by foot long seed pods that hang onto the tree until winter. This tree does better in warmer areas, is considered drought tolerant once established with no significant pest or disease problems and is suitable for planting under power lines, in parkways, parks and as an accent in a garden.

I feel it is worth sharing with you the little-known fact behind how we got to know the Tabebeuia tree. According to James E. Henrick the Senior Biologist and Curator of the Living Collection at the Los Angeles County Arboretum in Arcadia, the desire to introduce the Tabebeuia to Southern California originated with Dr. Russell J. Seibert, director of the Los Angeles County Arboretum from 1950 to 1955.

Unfortunately, seed sources from South America at the time were not very reliable. However, that did not deter Dr. Samuel Ayres, Jr., president of the board of trustees of the then California Arboretum Foundation, Inc., from gathering seeds of different species while vacationing in Brazil between 1953 and 1955.
As it is now, the Arboretum was a testing ground for new plants to be evaluated before they are introduced to the nursery trade. As a result of these seed gatherings, the following Tabebeuias were evaluated and produced at the Arboretum and given to local nurseries to propagate and sell to the public.

The Tabebuia chrysotricha commonly known as the golden trumpet tree with eye catching bright yellow flowers was the first to come out in 1964. The Tabebeuia impetiginosa commonly known as pink trumpet tree seen in the present photos, followed in 1979. The Tabebeuia impetiginosa ‘Pink Cloud’ with its very light pink flowers came out in 1984. And the Tabebeuia impetiginosa ‘Raspberry’ with its lavender to dark pink flowers was introduced in 1986.  Beside the above-mentioned varieties there is another gorgeous one, Tabebuia x ‘Apricot’ with beautiful apricot color flowers, it too was produced by the Arboretum in 1970 but has not been introduced yet with plans to do that in the future.